Where should I begin? Let’s me take you from the beginning so I can provide some flow.

I arrived maybe around 9:15 to the station KTM – Kajang station.  This was nearest to the super rural area the where the race was being held.  From there, Ubers was stacked all around me.  I pressed it and got an immediate message – my uber was right across the street.  HOW CONVENIENT! He was a funny guy, asking me why I don’t have a girlfriend in Thailand.

Told him the truth. You guys know that story. LOL

There was a logjam about 2km outside the race area, so I had him pull over and I walked it from there.  Enthusiasts, not as many as I thought there would be, were making their way to registration.  Loads of tents and little shops were stacked within the area, giving my hope that this venue would be 1000 times better than the last at Putrajaya Heights last July.  It exceeded my expectations — and THEN SOME.  The registration line was about 10 minutes compared to 1.5 hours last time.  Bag drop was convenient with a bunch of smiley faces and women asking me how the race was (of course after) and there was a lot of area and merchandise around.

I was probably the 3rd wave of the Open.  There were a ton of people behind me, all whom were enthusiastic.  Some were first timers and others were returning.  You had people from Brunei, Hong Kong, Singapore, China and other places all around.  When the race started, it was all running, mostly uphill (as Malaysia mostly does) and then were the rocks.  That’s right.  The first obstacle, aside from the walls and things we had to jump through, under, and over, was the nastiest of them all.  This is where the fun began because the comedians started coming out in force.  Being on an obstacle course enables you to speak freely amongst your fellow samaritans who are going through the same pain.

At this time, this is when I knew I had gotten much strong since last September.  Carrying the bucket of rocks up the hill didn’t present me with a problem.  In fact, I was zooming past everyone else who seemed gassed and out of breath — 2km in?! I was screaming motivational things while hearing the echo of “aroo” deep in the forests and even nearby.  Directly following that was the rope climb.  I finally climbed up that bad boy; however, I freaked out when I was coming down and I zoomed down the rope, gripping it with my fingers and feeling fire tear apart my thumb on my left hand and my ring finger on my right, leaving a blister on one hand and two layers of skin on the rope from…..me.  This was beyond painful for about 1km.  After that, the river, which was SUEPR FUN.  There were women saying, “I HAVE A PLAN TO CATCH!”  People were laughing and just having fun at that point.  Being in a shaded, sketchy, peculiar area between two sides of a mountain, trekking through currents puts the “omg” into what Spartan should be about.

From there on out, there weren’t any noticeable or stand-outish things that came about — just more laughs and weird obstacles.  I am now 3/3 in the javelin toss, hitting my target and cheering for myself.  There were some GORGEOUS women nearby saying, “goodjob!” Another one, who must’ve been from Eastern Europe and on the same team of the 10 that were standing around, asked me “tips?”  I didn’t know what she was saying, but when I realized it, I was flabbergasted and helped two of the ladies — unsuccessfully.  This definitely had to be the funnest Spartan or any race in general.  It tips the Tough Mudder in Melbourne, Australia 3 years ago and tops the Tough Mudder in Mesa, Arizona from last year.

Towards the end, there was a Malaysian guy who was running by himself…pushing himself.  I decided to run beside him; and both him and I met up with an Indian guy.  The three of us started running alongside some other foreigners and funny Ukrainians before getting to a difficult part of the course — the end!  This mashed a bunch of obstacles together: backstroking 75 meters, another river with a current, monkey bell swings, and a few others.  When I finished, I saw a gorgeous shirt and medal waiting for me.  That was definitely a 10km beast of a race.  That wasn’t 7km….and they had Super/Beast obstacles within it, too.  The Spartan Sprint last year in Chon Buri, Thailand was a cake walk compared to this.

So, showers, chats with so many people, figuring out my next step with the trifecta and everything in ensued.  Now came the most difficult challenge of my life.

Because this race was tucked away in a jungle plantation, I wasn’t too nervous about finding a taxi until after a race.  There were taxis, also known as extortionists (and way worse than Thai taxis), sitting outside the grounds.  However, they were all taken because they had customers inside.  I never thought about that because I knew taxis were a ripoff.  I saw one taxi driver, and later saw him at my hotel.  That story will follow.

No Ubers, no grabs, no nothing! I was left walking….about 5km, hoping either someone would help take me to a town or a taxi would come.  I would’ve paid anything at any given time to get the hell out of there.  Some people pulled over, but not for me.  Next thing I know I see a car, coming towards me, flash its lights and I said, “OMG! SAVED!”  My man Anson, who is down below in the photo, probably saved me from dying.  That’s no exaggeration, either. 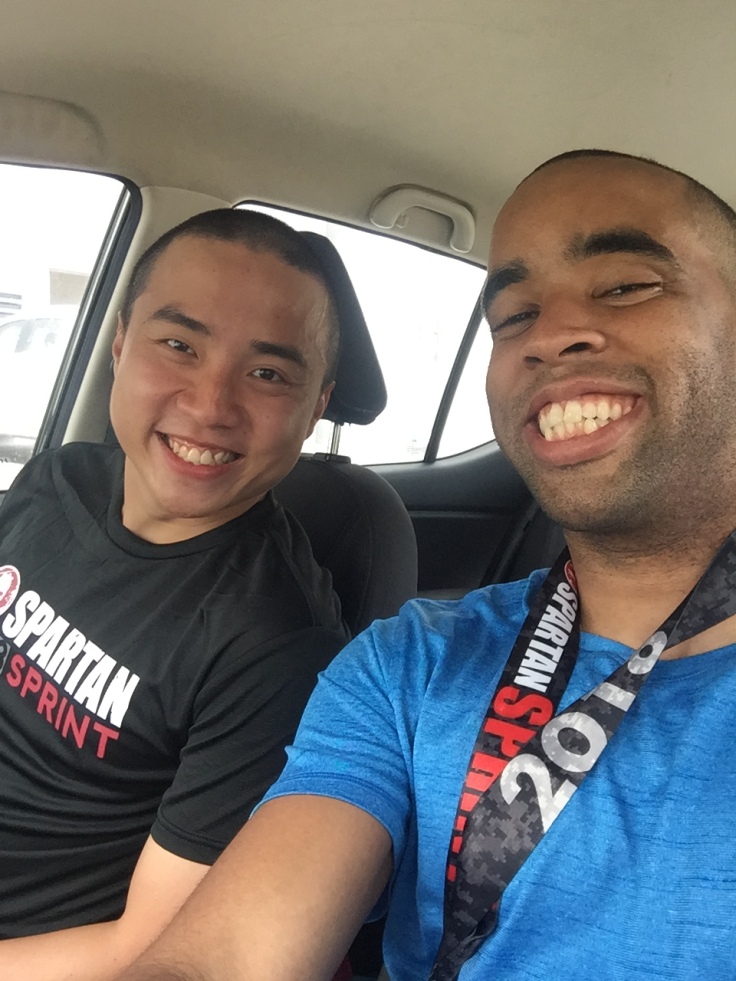 All in all, he sent me all the way to an LRT line.  After 15 minutes, this particular line wrapped around KL and I saw Berjaya Times Square, just across the street from where my hotel was.  Instead of continuing on, I got off, talked to the guy, and I was able to exit the station and walk to my hotel.

Oh, and guess who was there? That f***er that denied me a ride to begin with.  Get this.  From the KTM Kajang to the race grounds was about 23 ringits, which equates to about 7 USD.  Kinda expensive in Thailand.  However, this guy told me someone AT MY HOTEL went to the race, too! The bad part? The taxi charged him 400 ringits there and back, equivalent to more than 100$ USD!  Could you believe that?! That’s why I NEVER TAKE TAXIS in KL and haven’t in almost five years.  They’re cheats beyond belief.

I needed to tell all of you that in case you travel here.

And with that beings said, a couple more blogs are coming up about my time and future races, so stay tuned and a podcast is here for your appetite!